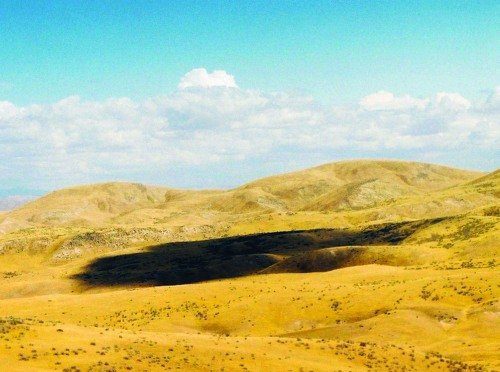 The first thing that springs to mind listening to Naïm Amor and John Convertino’s new instrumental album, The Western Suite and Siesta Songs, is the 1984 movie, Paris, Texas and Ry Cooder’s atmospheric soundtrack. It’s a coincidence, given Amor is a Parisian musician living in Tucson, while Convertino still works in Tucson but resides in El Paso, Texas. The duo’s new album was recorded in Arizona and Ohio, mixed and finished in Tucson and released by Albuquerque label, Living Music Duplication.

It’s a collaboration of open possibilities, a strong sense of place and a deep love of landscape. And it’s the openness that makes it stand out – their openness to cross cultures and continents in pursuit of their own sound. On his website, Amor describes the record as “the perfect soundtrack to a drive through the desert Southwest”.

The record opens with “Round Em Up”, a pared back western soundtrack a la “The Good The Bad and The Ugly” complete with a whistled theme. “Rye Grass Waltz” has a whimsical feel, all blue sky and golden grasses dancing, though you could equally be sipping a crisp vin blanc in Montmartre. The haunting “Of Dust and Wind” evokes the unease and isolation of the desert. “Jelly-Roll Tango” was a piece touted for Convertino’s band Calexico, but works beautifully in this collection – get that red rose between your teeth.

Both of these multi-talented guys play numerous instruments on the record: Amor the guitars, strings, lapsteel voices and whistles, and Convertino the drums, pianos, marimba, vibraphone and glockenspiel. They penned half the tracks each, then added their own influences to each other’s. It’s not the first time they’ve collaborated, with Amor having contributed to Calexico’s Feast of Wire and Convertino having played in ABBC (Amor Belhom Burns Convertino). It’s a fun listen, perfect for daydreaming and a siesta.

Buy The Western Suite and Siesta Songs in Europe