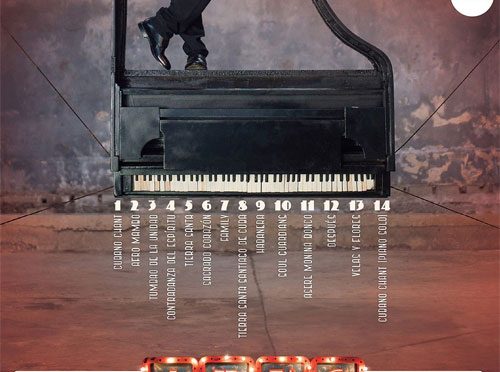 I’m a greedy girl…and I’m sneaky. I have secreted my way into the dark, messy lair of our esteemed editor and smuggled out a savory treat – ABUC, the latest by the Cuban Grammy nominated pianist, composer and producer Roberto Fonseca. Well worth the personal risks of being crushed under the weight of stacks of CD and mountains of press releases, ABUC is lush, delicious sophistication. Grounded by meaty Cuban percussion, set soaring with tight, neat brass and levitated by the sheer brilliance of savvy compositions, Mr. Fonseca pulls and tugs at the history of Cuba’s musical traditions to conjure up a brilliant homage to his homeland.

“The idea was to show a different Cuba, perhaps from a different direction,” explains Mr. Fonseca. “That’s why the album title is Cuba spelled backward. I wanted to review the Cuban music history – not only the styles that have influenced me most, but in a broader sense, so people could have a better idea of how the orchestras used to sound in those times.”

This Cuban powerhouse comes to music by way of his drummer father, Roberto Fonseca, Sr., singer mother, Mercedes Cortés Alfaro, and older half-brothers drummer Emilio Valdés and pianist Jesús “Chuchito Valdes, Jr. who are the sons of Ms. Cortés’s first marriage to pianist Jesús “Chucho” Valdes, and of course the rich music that pervades the island like the scent of tropical flowers. With collaborations with the likes of Ibrahim Ferrer, Omara Portuondo, Carlinhos Brown and Orlando “Cachaito” Lopez, Mr. Fonseca has dazzled listeners on countless tours and recordings like Akokan (2010), Tiene Que Ver (2002), Zamazu (2007), Yo (2013) and Temperamento (2012).

Released under the Impulse label in conjunction with Verve, ABUC is set for digital release on October 28th and physical copies out on November 11th. Writing most of the compositions himself, Mr. Fonseca inundates listeners with a collection of tracks that drinks deeply from bolero, danzón, cha-cha-cha, contradanza, descarga and hip-hop, all immersed in Mr. Fonseca’s jazz sensibilities. Often the music seems steeped in the tradition, helped by way of the recording process.

Mr. Fonseca explains, “Capturing the music as it used to be done in the old days means getting out of the high quality sound of these days, and if a certain song invoked a certain time when the sound was not that clean, that’s how we had to do it on ABUC. I’m sure many people will get confused and will think some tracks were composed some time ago. I hope they do, because that was our goal.”

Chocked full of goodies, listeners get the full force of Mr. Fonseca’s mastery from opening track “Cubano Chant” with its plummy percussion, sleek piano and some fabulous help from Trombone Shorty. ABUC is a feast of delights with the cleverly dated sections of “Afro Mamba” with vocals by Dayme Arocena and Carlos Calunga, the dazzling guitar laced “Tumbao de la Unidad with the revered Eliades Ochoa and the sizzlingly sassy “Family” which is stylized in the way of the 70s group Los Zafiros.

ABUC is masterful and sleekly sophisticated, but it is infused with that familiar Cuban invitation that music is an elemental joy and that everyone should have a good time.

Buy ABUC in the Americas