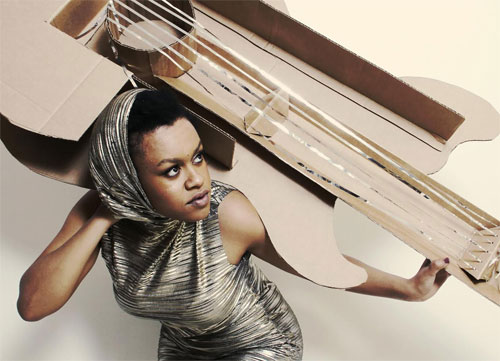 Ethiopian American singer-songwriter and composer Meklit Hadero, beter known as Meklit, will be performing on October 5th in Los Angeles, California. She will be presenting her new musical project “This Was Made Here” (TWMH) at the Skirball Cultural Center. TWMH is described as a danceable celebration of Ethiopian beats and pentatonic melodies, with striking horn lines and inspirational lyrics.

Meklit has released two solo albums and three collaborative albums. She was born in Ethiopia and raised in Brooklyn, New York. Meklit is currently based in San Francisco. In addition to her musical activities, Meklit is also a cultural activist, TED Senior Fellow, and Co-Founder of the Nile Project.

Meklit talks to World Music Central about her musical background and upcoming concert:

Angel Romero – You’ll be performing “This Was Made Here” at the Skirball Cultural Center. How would you define this new project?

Meklit – This is Ethio-Jazz infused music, with groove and pentatonic melodies at the core. In 2011, I met Dr. Mulatu Astatke, the Godfather of Ethio-Jazz, and he pushed me to add my own vision to the continuum of this music. I’m inspired by him musically, but also in terms of what he did, experimenting with bringing his sonic lineage into contemporary expression. He lived for years in the 1950s and 60s New York, when American Jazz was moving and shaking. He brought that spirit back to Addis, and that’s how the bloom happened. So, he’s deeply in this music not only in the sound, but in the approach.

What band will you be taking to Skirball Cultural Center?

My band is myself on guitar, and even playing a little bit of krar (the traditional Ethiopian harp); Colin Douglas on drum kit; Marco Peris on percussion; Howard Wiley on tenor and bari sax; Michael “Tiny” Linsdey on bass; and LA’s own Todd Simon of Ethio-Cali on trumpet. The fabulous Dexter Story will be sitting in with us on electric guitar for a few tunes as well. It’s gonna be hot!

How did the band come together?

We’ve been working intensely on this music for the past year, when we had the debut at Yerba Buena Center for the Arts in San Francisco back in May. Tiny is a new addition. This was also a chance to collab with Todd Simon, who has been doing so much cool work with Ethio-Jazz down in LA. It’s exciting to have him on board.

What do you consider as the musical essentials, those songs or performers that you draw on as a group?

We are definitely very inspired by the music that came out of Addis Ababa in the late 1960s and early 70s. But I also listen to a lot of traditional music, and I’ve had the whole band listen to a lot of that as well. That’s where the swing comes from. One of my favorite bands is Ethio-Color Fendika, who makes a home at the Fendika Asmari Beit (traditional music house) in the Kasanchis neighborhood of Addis. They are my dear friends and deep inspirations.

Tell us about your first recordings and your musical evolution.

My first EP was called 8 Songs, and it was just me singing and playing simple guitar, with a few songs also featuring Yair Evnine on cello. We almost called it Songs from a Hallway, ‘cause most of it was recorded in a hallway with great acoustics. Those were my first tunes, but it was a big musical moment. We released it in the last days of 2007. I had 17 Bay Area artists hand paint the first 300 covers, and the release party was an art show. You could pick your cover off the wall itself and then go get it filled with a disc at the counter. I’d love to do something like that again.

My musical evolution came later. I always sang but didn’t really go for it professionally till I moved to San Francisco, and found a community of artists from all disciplines and all walks of life. They were deeply involved in creative work, and also in the ways that art helps us explore community and the world around you. It was a heady time, and I dove right in.

Every step I took towards music, music took ten steps towards me. It was a magnetic relationship. I got an audience through the Mission Arts and Performance Project (MAPP), a free street level arts festival that I also co-organized. I played every MAPP for three years, and suddenly folks were coming to my other shows too. Those folks became my audience. It was very organic.

What musical instruments do you use?

I play guitar. I have started playing krar, but I am really at the beginning of that journey. I am constantly writing basslines, so I want to be a bass player, but I haven’t done it yet. This new music is very dance oriented, which makes both drums and percussion a natural fit. And finally, I am eternally in love with horn sections. They just feel so good.

Most of the music we currently receive from Ethiopia is Ethiojazz, rap and a great pianist named Samuel Yirga. How’s the current musical scene in Ethiopia? What artists would you recommend?

I love Sammy, by the way. He’s not only an amazing musician – we featured him in the tune Kemekem that came out on my last record – but he’s also a beautiful human being, deeply dedicated to art. I can’t say enough about him.

Other folks I love are Fendika, as I mentioned above, the saxophonist Jorga Mesfin, the traditional flute player Tasew Wendem, the masenko player Endris Hassen, and the krar player Messele Asmamaw. These are all geniuses. Also the singer Selamnesh Zemene is seriously one of the most powerful voices I have ever had the pleasure of hearing. Also – my dear friend Munit Mesfin is a wonderful singer-songwriter really doing her thing out there. The talent is huge. Too many folks to name.

Music video for “Kemekem” (I Like Your Afro) featuring Samuel Yirga:

Which are your favorite musical festivals, and what makes them so special?

I love the Lotus Festival in Bloomington Indiana. It’s amazing. It’s like the whole town comes out to welcome you. I love Celebrate Brooklyn in Prospect Park, I used to go there and listen to music as a kid. When I was 6 or 7, I got lost there with my best friend, and we wandered backstage. It was my first time ever hanging out in a green room. They gave us ice cream cones and announced our names from the stage. I’ll never forget that!

I love Stern Grove in San Francisco. Dragonflies enjoy themselves while the music is rocking, and it’s incredibly diverse with folks from every corner of the Bay. Also – I’ve never been to Afropunk but I sure do love what it stands for.

If you could gather any musicians or musical groups to collaborate with who would that be?

Well a few of the folks that I really would have loved to play with died this year – David Bowie, Prince, Getachew Mekuria. Sad losses, all of them. Others include, Dr. Mulatu Astatke, Girma Beyene, The Roots, Leonard Cohen, Bjork, Nona Hendryx, Cindy Blackman, Caetano Veloso.

What music are you currently listening to?

Do you have any upcoming projects to share with our readers?

I was recently commissioned by Lincoln Center to create a body of music called There Is No Sound Barrier, based on the concepts of a musically alive world that I explore in my TED talk. But that won’t be out till 2019 or so. For now, it’s all about Ethio-Jazz.