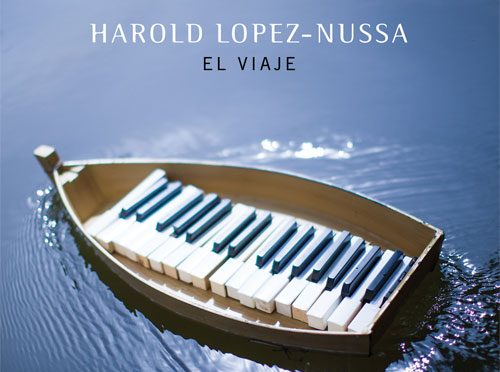 Composer and pianist Harold Lopez-Nussa’s El Viaje, out September 9th on the Mack Avenue Records label will certainly earn the cool kid on the block spot in Latin jazz offerings this year. Sleek and agile, El Viaje is comfortable in its own skin, devoid of pretension and without any ham-handed artistic wrestling.

Hooking international influences from Africa, France and the West into his own brand of Cuban jazz, Mr. Lopez-Nussa fashions a sound that’s seamlessly sophisticated and globetrotting easy.

Mr. Lopez-Nussa says of the recording, “Having a non-Cuban musician on this recording speaks to our contact with other cultures. Especially with African culture, which is so far from ours geographically and yet so close. Every time we play, I believe we enter into a journey we are creating. Ever since I was a kid, since I began to study piano, music, I have tried; I have searched for that journey of the mind, always traveling with music. I remember that I started playing ‘El Viaje’ while on tour as a way of feeling closer to home, and when I’m here, it’s also a way for my mind to travel.”

With a career that includes recordings as New Day (2013), Havana – Paris – Dakar (2015), El Pais de las Maravillas (2011), Herencia (2009), Sobre El Atelier (2007) and Canciones (2011); a spot on the “Fourth Piano Concerto” by Heitor Villa-Lobos and a recording with Cuba’s National Symphony Orchestra; a first prize slot and an Audience Prize of the Jazz Solo Piano Competition at the Montreux Jazz Festival; a collaboration with David Sanchez, Christian Scott, Stefon Harris and a three year touring spot with band for the revered Omara Portuondo, Mr. Lopez-Nussa still finds his Havana hometown a creative well.

“I’ve always liked the idea of projecting myself to the world from here,” says Mr. Lopez-Nussa. “The personal ties are very strong for me. A lot ties me to this country. I want this to be my place to create—even if I can have those great experiences traveling. The personal is essential for my creative process. Being able to go out into the neighborhood where I grew up, a place that I know so well, walk on the Malecón, sit by the sea. This is where I want to be.”

Opening with the jaunty “Me Voy Pa’ Cuba,” El Viaje is a treat with compositions that unfold easily and organically with flashes of delicious rhythms, sleek horn lines and brilliant improvisational piano sections. Mr. Wade provides the vocals for the heady, Africa inspired “Africa,” before dazzling “Feria” takes over in a mix of Cuban party and jazz club with a little Thelonious Monk added in for good measure. The elegant bolero “Lobos’s Cha” is as much as a delight as is the hip sassiness of “Bacalao Con Pan.”

Other goodies include the elegant lines of brass and piano against delicious percussion on title track “El Viaje,” the bright breeziness of “Mozambique En Mi B” and sheer coolness conjured up on “D’Una Fabula.” Equally good is the sly musical journey that is “Inspiracion En Connecticut,” as well as the evocative sultry mystery whipped up Mr. Lopez-Nussa and company on “Oriente.”

Mr. Lopez-Nussa has ensured the conditions are good, the weather fair and the course of El Viaje is smooth and easy.

Buy El Viaje in the Americas