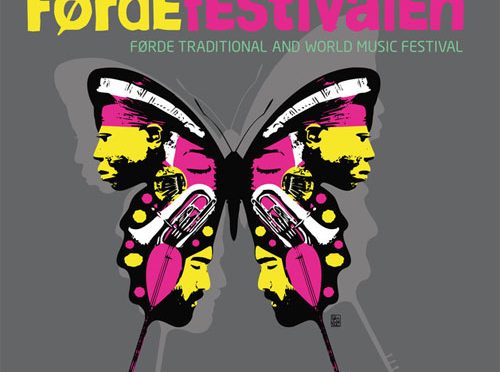 My summer travels this year took me to the Montreal International Jazz Festival as well as Forde Traditional and World Music Festival. This is my second time in Norway for the festival; see my earlier 2012 interviews with the festival director Hilde Bjørkum and artists Kevin Henderson, Damily, Ellika Frisell, Renata Rosa, Sidi Goma, and Frikar. The performances are spread across 20 stages in large indoor halls, arts centers, outdoor stages and even neighborhood barns.

Established in 1990, the four-day festival has always had an anchor theme, such as aboriginal music, regional showcases or gypsy music. The theme this year was ‘Flight,’ reflecting not just the tragedies of the refugee crisis but also the creative traditions of many of the affected communities.

At the stunning mountain-top Floyen Restaurant in Bergen, Norwegian musicians Gro Marie Svidal and Irene Tillung performed a melodic set of Hardanger fiddle and accordion music. They shared stories of the folk songs dedicated to local traditions and even neighboring mountains. The dinner conversation after the performance revolved around various topics like music championships, folk traditions in Jolster, and the rise of the micro-brewery and craft beer movement in Norway!

A visit to nearby village Hyllestad revealed a museum preserving the ancient millstone manufacturing tradition of the region. We also visited the charming hillside Amot resort, dedicated to boutique performances of folk and opera.

Other site visits took us to the campus of United World College and its humanistic view of education, as well as the home of legendary Norwegian painter Nikolai Astrup. The home and museum were located right next to a stunning fjord, which was the source of inspiration for many of Astrup’s works.

The opening ceremony of the Festival set the stage for the next four days of programming: a dedication to the human rights and cultural traditions of refugees. Human rights lawyer Lavleen Kaur spoke evocatively of the plight of displaced refugees, drawing on examples such as the India-Pakistan partition of 1947.

Singers from Sri Lanka, Norway and Ethiopia performed together in a chorus, and brief vignettes featured bands from Eritrea, Syria, Colombia and Hungary (more on them later in this article). Swift stage changes, flawless acoustics, and colourful digital art marked the slick transitions between bands.

Singer-songwriter Faytinga delivered a haunting set of music from Eritrea, reflecting her years in the East African country’s liberation struggle since she was 14 years of age. Faytinga is from the Kunama ethnic group. She also plays the krar, a small lyre, and has released the album Numey. The band members included Khalid Kouhen (percussion, including ghatam), Federico Umberto (krar, bass) and Jonas Knutsson (saxophone).

The dancers from Kenya and Malawi showcased traditional percussion instruments and farmland songs. Viguela played the joyous dance music of the Castilla-La Mancha region, led by Helena Pérez on vocals and Juan Antonio Torres on guitar.

One of the most creative performances was titled Arctic Ice Music, featuring ice instrumentalist and percussionist Terje Isungset from Norway. In a unique collaboration with indigenous vocalists from Canada and Russia as well as Norwegian singer Maria Skranes, Terje played a range of instruments made from ice – including a horn, marimba and a percussion table with ice crystals. This was also a call to harmony with nature and awareness about global warming – hopefully we will never see the day when the ice caps disappear.

Mor Karbasi played music in the Sephardic-Jewish tradition from Spain, and sang in the Ladino language. Her family roots are in Morocco and Iran as well, and the high-energy set of music and dance blended flamenco, fado and Arab rhythms.

The evening ended with superb live performances by gypsy brass band Malhala Rai Banda from Romania and Romengo from Hungary. Alcohol flowed copiously from the hotel bar (even at stiff Norwegian prices), and the bands engaged the audience in loud call-and-response sessions. Romengo’s Mónika Lakatos (vocals) and percussionists János Lakatos (milk can) and Tibor Balogh (on something which looked like an inverted kitchen sink) really stood out in the last performance!

Another unique band performing at the festival was the quartet Huun-Huur-Tu from Russia’s Tuva region in Siberia; they wowed the audience with their folk stories, multi-tonal throat singing (by Radik Tyulyush) and traditional instruments such as igil, doshpuluur, byzaanchi, khomuz, amarga, marinhuur and tungur.

A highlight of the day was Broukar (‘brocade’), which was founded in 2007 in Damascus to preserve and revive the musical heritage of Syria. Highlights included three performances of the hypnotic Whirling Dervish dance by Ahmad Alkhatib, along with Sufi vocals by Bayan Rida. I look forward to seeing the performances again at the Rainforest World Music Festival in Malaysia next month, where the band will be making another appearance.

Day Three of the stage performances ended with a slickly choreographed gala featuring brief vignettes from another set of bands from Denmark/Sweden, Haiti, Brazil, Norway, and Canada (more on those later). The Norwegian compères interspersed the acts with humor and wit.

The celebrations continued in the festival hotel with performances from Haiti, Colombia and Eritrea. Haitian ensemble Chouk Bwa Libète blew the audience away with poly-rhythmic drumming and trance-inducing chants in a fine voodoo style called mizik rasin. Front man and composer Sambaton kept the band tightly coordinated, and he led the band in a dance line right into the audience at the end.

Noency Mosquera Martinez and her quartet played native folklore from Colombia, such as rondas, arrullos, alabaos and gualí. She was then followed by Eritrea’s Faytinga, while other folk musicians played on the floor below. But that was not the end – an open-ended jam featuring dozens of musicians from the various bands continued in the hotel’s library till 3 am and way beyond!

Day Four kicked off with a remarkable feature: a rendering of lullabies from around the world by refugee mothers settled in Norway. This was also perhaps a haunting call for the right to peace for babies around the world, particularly in war-torn areas.

The Forde Arts Museum played host to an intricate and energetic set by Trio Madeira Brazil. They blended choro, folk and classical music, and the three artistes received rousing applause for an encore: Ronaldo do Bandolim on mandolin, Marcello Gonçalves on seven-string guitar and Zé Paulo Becker on acoustic guitar.

The main-stage performances ended with a rousing set by La Bottine Souriante from Canada, who trace their roots all the way back to 1976 in Quebec. Playing French North American roots music amplified by a brass section and floor-board tap-dancers, the group had the audience on their feet for a line dance; they also poked fun at the French and English languages in equal measure!

Buses then took the attendees to a hillside barn for a terrific acoustic set by youthful Danish-Swedish trio Dreamers’ Circus. They pushed acoustic collaboration to new dimensions, while also playing unusual instruments like the traskofiol or clog fiddle from Skane in Sweden. Their tracks like ‘Fragments of Solbyn’ drew loud applause, and their camaraderie and talent will ensure a long successful musical career.

The festival ended in the hotel with football fans watching France lose to Portugal in the EuroCup finals. Three spontaneous music and dance jams then broke out in the bar area, even though many had early morning flights to catch in just a few hours!

Other creative features of the Forde Festival which stood out were the jugglers and stilt-walkers of Rajasthan’s troupe Circus Raj; some of the unusual instruments on stage (eg. goat horns, milk cans, bicycle wheel percussion); and the superb designs of the festival logo and symbols (butterflies, reflecting refugees’ flight as well as fragility). Other art work featured the human heart as a bagpipe, a banana as a lyre, and a pear as a violin!

“Sadly, music for children during war is only bombs and rockets,” lamented Taoufik Mirkhan, kanun player of Syrian band Broukar. “The heritage of Syria is the heritage of the world – alphabet, music sheets and more,” he added. His fellow artiste Ahmad Alkhatib, explained that dervish dance is a way of saying thanks to God for life.

In the coming articles, I will feature more in-depth interviews with the artistes, along with reviews of their albums. Some of the CDs I picked up at the festival include Spring du Fela, Boreas, Temperamento, Arrivals, Second Movement, Ao Vivo Em Copacabana, Appellation and El Bango de Bojaya.

In sum, this year’s music in Forde focused on the cultural richness and complexities of countries otherwise associated with war and poverty, according to festival director Hilde Bjørkum.

A thousand thanks, Norway – Tussen Tak!

More about the festival at www.fordefestival.com