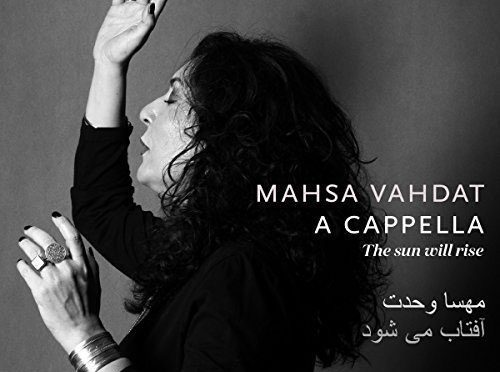 Mahsa Vahdat a cappella – The Sun Will Rise (Kirkelig Kulturverksted, 2016)

Okay, I am going to lapse into my inner icky fangirl for a moment or two. One of my favorite record labels, the Oslo, Norway based Kirkelig Kulturverksted and one of my favorite producers, Kirkelig Kulturverksted’s very own Erik Hillestad have put out The Sun Will Rise with the stunning Iranian singer Mahsa Vahdat.
For anyone who has read some of my reviews I have a longstanding devotion to female Iranian singers like Ms. Vahdat, her sister Marjan Vahdat, Azam Ali, Parisa and Mamak Khadem.

Mahsa Vahdat is a particular favorite for her collaborations on the Lullabies from the Axis of Evil and recordings such as Songs from a Persian Garden, Traces of an Old Vineyard, I am Eve with Marjan Vahdat, Twinklings of Hope also with Marjan Vahdat, A Deeper Tone of Longing: Love Duets Across Civilizations with Mighty Sam McClain and Sent of Reunion: Love Duets Across Civilizations also with Mighty Sam McClain.

With a voice that is as rich as it is expressive, Mahsa Vahdat is the certainly the gold standard for Iranian vocalists and so it comes as no surprise that Ms. Vahdat would craft and entirely a cappella recording. What is the real surprise of The Sun Will Rise are the extraordinary lengths Ms. Vahdat, Mr. Hillestad and crew took to dazzle listeners.

Delving into a wealth of poetry from likes of Forough Farrokhzad, Rumi, Saadi, Mohammad Ebrahim Jafari, Aref Ghazvini and others, Ms. Vahdat takes her hauntingly graceful vocals on the road to record a cappella in venues like the barrel-vaulted mausoleum of painter Emanuel Vigeland at The Emanuel Vigeland Museum in Oslo, Norway; the Eglise Saint-Claude in Provence, France; the Iglesia de Santa Maria in Requena, Spain; and the Palacios Nazaries in La Alhambra in Granada, Spain; as well as venues in Poland and Turkey. Restricted from performing publicly in Iran, Ms. Vahdat chose to seek out those ancient places where her vocals would rise up ancient walls, age worn bricks and history steeped ceilings. The effect is glorious.

With snippets of the captured sounds of passing birds, water trickling through fountains and the occasional bell, The Sun Will Rise is quite simply strikingly lovely. Ms. Vahdat’s achingly poignant vocals echo throughout The Emanuel Vigeland Museum on opening title track “The Sun Rises” so that the listener can’t help but be enchanted.

Completely devoid of gimmicks or artifice, Ms. Vahdat’s vocals implore, revere and appeal to the greater grace on each of the 21 tracks of The Sun Will Rise.

Listeners are treated to everything from the wideness of cathedral spaces to the most intimate of spaces with equal measures of clarity of sound and the impassioned splendor of Ms. Vahdat’s vocals.

Stunningly spare, Mahsa Vahdat never sounded so richly worked as in this recording.

Buy The Sun Will Rise in the Americas

Buy The Sun Will Rise in Europe