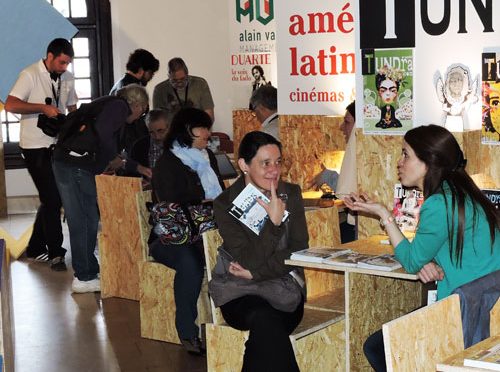 The Iberoamerican Music Expo 2016 turned out to be a great opportunity to catch up with Portuguese music and some of the album releases from neighboring Spain and Latin America.

The EXIB trade show area was smaller than WOMEX, but there was a pretty good representation of booking agencies, festivals, institutions and record labels/producers.

One of the most fascinating exhibitors was Tradisom Producoes Culturais. This record company puts together fabulous boxed sets, books with CD, hard cover CDs, and regular CDs focusing on traditional and contemporary Portuguese folk music. Some of the goodies exhibited included a mammoth hard cover 552-page book accompanied by 4 CDs titled A Origem fo Fado (the origin of fado).

Tradisom also had a boxed set with the entre discography by one of the greatest Portuguese folk bands in the late 20th century, Brigada Victor Jara. There were also fado boxed sets, a Julio Pereira (cavaquinho master) hard cover book+CD and much more. This label is a goldmine for Portuguese music.

Several of the exhibitors represented some of the artists that showcased throughout EXIB 2016. I managed to get a pretty decent amount of CDs and memory sticks with press kits so we will be reviewing some of this material in the next weeks.

In this era of digital everything, it was great to see a new print magazine made in London. La Tundra is a free Spanish language culture and arts magazine published and designed by Silvia Demetilla. The magazine features CD and book reviews, the theater scene, urban radar (reviews of recommended places in London neighborhoods), urban spaces, travel articles, interviews and environmental consciousness reports.

Enrique Blanc explained that Mexico has four main music production areas: Mexico City, Tijuana, Monterrey and Guadalajara. Mexico City is a huge city that produces all music genres; Tijuana has an interesting electronic scene and is heavily influenced by its northern neighbor, the USA; Monterrey (near Laredo and Brownsville in Texas) focuses on conjunto and norteño sounds.

Festival programmers met for the 2nd Encounter of Ibero-American Music Festivals. The first session was a networking and strategizing section open to festivals only. The second part was open to artist managers and agents as well as musicians.

My impression this year is that EXIB has grown. Naturally, this year the Portuguese presence was much larger, which made the event very attractive for those unfamiliar with the Portuguese music scene. I also saw some media colleagues from beyond Ibero America: musician and writer Andrew Cronshaw (UK), Simon Broughton of Songlines magazine (UK) and Drago Vovk from Radio Sraka in Slovenia.

Plans for EXIB 2017 have not been finalized yet, but it looks like Cordoba in Spain might be the next location for this unique music expo.

The Passionate Music of Alentejo, the Focus of EXIB 2016 Opening Concert

The Diverse Sounds of Iberia, Mexico and Cuba at EXIB 2016 Day 2 Showcases