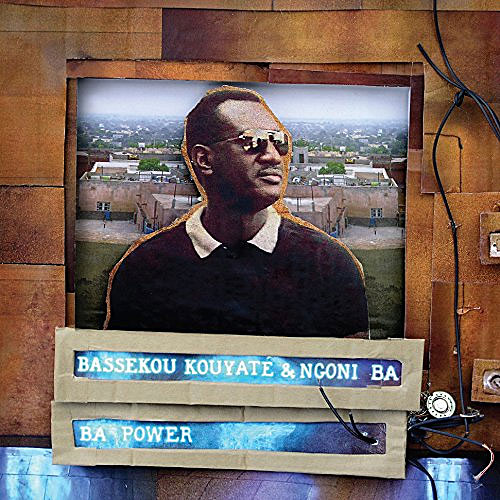 Call me a traditionalist, call me a purist, call me a snob, call me a journalistic hack. (Okay, that last one is kind of beside the point.) But it’s a fact that since my musical tastes went global 30-plus years ago, I‘ve leaned heavily in favor of music that sticks closer to the roots. There may well be demographic reasons pertaining to my age, my race, my status or my upbringing that contribute to my preference, or maybe it’s just my concept of authenticity that guides me. Does that mean my choice of music has to sound as close to an Alan Lomax field recording as possible? Good heavens, no. Like most people, I simply have my own ideas, shared or not, about what it means to keep it real. And modernizing need not preclude reality in my worldview, even when it comes to my abiding love for African music. The pair of gents reviewed herein share not only a surname, but an apparent desire to expand their artistry without losing sight of it.

Mali’s Bassekou Kouyate is a wizard of the ngoni, a paddle-shaped traditional West African lute that comes in various sizes. It looks deceptively simple but in the right hands can unleash some mighty sounds. To say Kouyate’s band Ngoni Ba is all about the ngoni would be a misstatement, for although multiple lutes are the group’s mainstay, the songs on Ba Power (Glitter Beat, 2015) add amplified non-African instruments (guitar, drums, keyboards, trumpet). Despite the additions, it’s the wall of ngoni (with Kouyate’s own in the lead) that really grabs you.

Rockish paces on some tracks unleash the power the title promises, but as often as not the music is just as mighty at slower speeds thanks to the tart, twangy interplay of the small, medium and bass ngoni and the fact that they’re always prominent in the mix. Further power comes courtesy of Amy Sacko’s soaring vocals, the snap of the calabash (gourd drum) and the subtle application of electronic overtones here and there. Every song is a corker, but best of the lot is “Abe Sumaya,” on which Kouyate and his crew- Muslims all -assure us that the loathsome ideology of Islamist fundamentalism will never prevail in Mali.

Another Kouyate, namely Sekou Kouyate, hails from Guinea and plays the 21-stringed kora. He’s teamed with guitarist/vocalist Joe Driscoll (like me, a native upstate New Yorker) on Monistic Theory (Cumbancha, 2016). The two have been collaborators since 2010, and while matchups between African and Western musicians are nothing new, these gents have a particularly good spark. Kouyate’s fluid kora and airy vocals mesh with Driscoll’s snappy guitar and rap cadences minus any unnecessary interference from overproduction, commercial aspirations or canned beats.

The fairly minimal accompaniment of drums, bass and percussion provides a snug foundation for Driscoll and Kouyate’s bilingual discourses on love, unity and the power of music, and the mostly fast tempos inspire dancing to compliment the food for thought. What I really like about this disc is how unpretentious it feels. It gets to your heart rather than getting in your face, staying true to its titular theme of oneness and letting the music convey a positive message despite the troubles currently besetting mankind.

Tom Orr is a California-based writer whose talent and mental stability are of an equally questionable nature. His hobbies include ignoring trends, striking dramatic poses in front of his ever-tolerant wife and watching helplessly as his kids surpass him in all desirable traits.