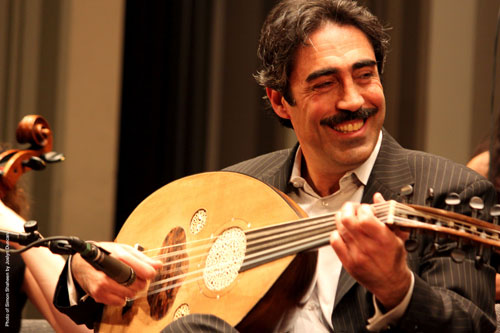 Violin and oud master Simon Shaheen, a crucial major figure in the promotion of Arab music, will bring to life the Arab music of Al-Andalus and blend it with the art of flamenco in a program of instrumental and vocal music and dance. Shaheen will be joined by the admirable Moroccan singer Nidal Ibourk, who has collaborated with him on many occasions; the young fiery flamenco dancer Auxi Fernandez who complements the music with her sinuous arm movements and explosive footwork; flamenco vocalist, guitarist and pianist Juan Pérez Rodríguez, from a family of Gypsy musicians; and Shaheen’s much-admired Qantara ensemble.

The program renews a relationship that began more than a thousand years ago; it reveals the commonalities of a music born in cultural centers of Iraq and Syria, blew like the wind (zafir) across the waters of the Mediterranean to Al-Andalus, blended with elements of Spanish music, and was brought back across the sea to North Africa where it flourished in the cities of Morocco, Algeria and Tunisia.