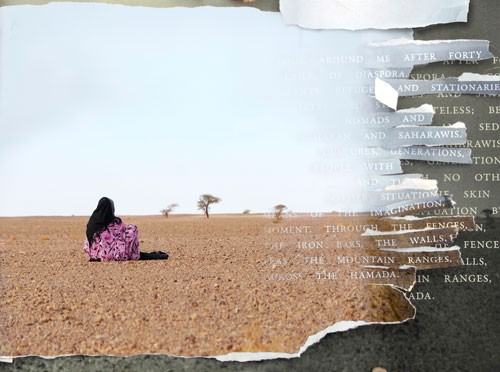 Western Saharan musician and activist Aziza Brahim explains, “I’m not able to separate politics, cultural and personal concerns. So, the focus of my music is all of these areas at the same time. Political, because of its commitment to the denunciation of social injustice. Cultural, because it searches for new musical ideas. Personal, because it expresses the worries of a person that aspires to live with dignity in a better world.”

For Ms. Brahim taking on the issues of today’s refugee crisis is both personal, having been raised in a Saharawi refugee camp in the Algerian desert and a fuel for the creative process for her latest recording Abbar el Hamada or Across the Hamada, out on the Glitterbeat label.

Conjuring up the familiar bluesy revolving rhythms of the Sahara and poking at the powers that control the flow of migrants and refugees, Abbar el Hamada is an expressive, yet restrained, call for compassion with Ms. Brahim’s plaintive vocals against a backdrop filled with plumy guitar lines and neatly worked African percussion.

With the 2012 recording Mabruk with Gulili Ma and the 2014 release of Soutak to her credit, the Saharawi singer has fashioned a smoothly produced recording with Abbar el Hamada, enveloping the desert blues in the warm, rich percussion of West Africa.

Beyond the message, Abbar el Hamada doesn’t rely on sharp edges, but instead enfold the message in a sleekly worked sound as with opening “Buscando la Paz” and the revolving rhythms of “Calles de Dajla.” Darkly lush tracks like “El Canto de la Arena” and “Mani,” with guest guitarist Samba Toure, are real treats with the sorrowful vocals of Ms. Brahim working their plaintive appeal against a quiet kind of blues.

“La Cordillera Negra” is another standout track with its subversive Spanish flair, slinky guitar lines and, believe it or not, a real percussion solo that is rich and rewarding.

Closing track “Los Moros” is just as delicious with its camel plodding across the desert rhythms and moody feel.

Abbar el Hamada is testament to Ms. Brahim’s social activism, as well as her ever increasing collection of fans, proving that while the road may be difficult music can lighten the load.