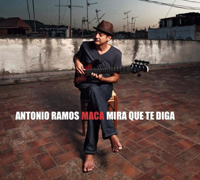 After many years as a reliable Flamenco bassist, Antonio Ramos ‘Maca’ has recorded his first album. Mira que te diga, which could be translated as “Let me tell you” was produced by Maca himself and is a showcase of his talent as a bass player in three different genres, Flamenco, funk jazz and smooth jazz.

All these years spent playing Flamenco have had a profound effect on Antonio Ramos’ style. He has mastered the technique of Flamenco bass and the best cuts on the album are the self-penned pieces with a deep flamenco flavor, where he is joined by a long list of reputable guitarists, vocalists and percussionists, including José Miguel Carmona, Jorge Pardo and Tomasito.

Ramos also stands out as a funk jazz bassist, clearly influenced by the great Marcus Miller. I’m not as interested in the smooth jazz material. Thankfully, there is little of it.

Antonio Ramos Urbano grew up in Granada (southern Spain), surrounded by the sounds of Flamenco and rock music. He formed his first rock band at 16. At 24 he moved to Madrid where he attended the Taller de Músicos school and participated in various workshops and seminars by renowned American musicians. In the Spanish capital he played with various rock, funk, flamenco, jazz, and Latin music bands, etc.

Mira que te diga is an outstanding debut album by one of the top electric bassists in Spain, which blends bass wizardry with the passion and vitality of Flamenco.