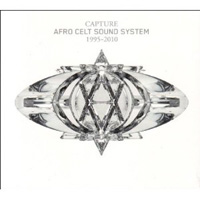 Afro Celt Sound System return with Capture, a career-spanning double CD, released by Real World on the 6th of September. Cherry-picked from the collective’s five acclaimed studio albums, the 25 tracks are divided into songs (Verse) and instrumentals (Chorus). The songs are beautifully re-mastered to lend the sound a new warmth and allow the dynamics to emerge as originally intended.

When Afro Celt Sound System burst onto the music scene some 15 years ago their impact was so instant, so astounding, that it hit like a thunder crack. Here was a band unlike anything else, a band whose fusion of West African rhythms, Irish traditional music and cutting-edge dance grooves battered the senses and unleashed a wellspring of joy and liberation. Festival audiences did a double take then danced like dervishes. Albums flew off the shelves. There were awards and Grammy nominations.

Afro Celt Sound System were the perfect storm: a phenomenon whose confluence of elements swept you away on a journey of light and shade, delicacy and power. When they added diverse new touches – Indian bhangra, Arabic influences, dub reggae, more – they did so seamlessly, in ways that only enhanced their sound and emphasized their openness. A supergroup whose line-up expanded and evolved around four core members (Simon Emmerson, James McNally, Iarla O’Lionaird, Martin Russell), the Afro Celt’s pan-global sound redefined dance music and stumped music critics. They remain defiantly, enigmatically uncategorisable.

The track ‘Persistence Of Memory (Rae and Christian Remix)’ is available to stream on Soundcloud.

Following the release of Capture the band will be playing the Barbican, London on the 2nd of November.

9 Go On Through (featuring Liam O’Flynn and Pina Kollars)

10 Rise Above It (featuring Mundy and Eileen Ivers)

13 When I Still Needed You (featuring Dorothee Munyaneza)