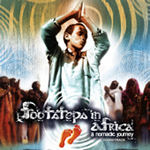 Footsteps in Africa: A Nomadic Journey is the soundtrack to a documentary film by director Kathi von Koerber, marking a road trip through the Sahara desert of Mali about the Tuareg/Kel Tamashek tribes living in the areas in Mali near the Mauritanian border. Documenting the divide between modern living and the nomadic way of the Tuareg and Kel Tamashek peoples, Footsteps in Africa sets out to explore these people’s music, dance and way of life. Now while I did not receive a copy of the film, I can say the music is simply stunning.

With a pool of musicians like Jamshied Sharifi Habib Koité and Hassan Hakmoun, as well as the groups Tinariwen and Tuareg Nomads Kiah Keya, Footsteps in Africa leaps headlong into a kaleidoscope of African colors that are as brilliant and vibrant as their peoples. Jamshied Sharifi’s bold cinematic sound wrapped around live jam tracks make this collection of songs a triumph.

Footsteps in Africa pairs the sumptuously worked “Mariama” by Mr. Sharifi against the infectiously good natured “Tuareg Dance Jam” by Tuareg Nomads Kiah Keya so that it’s impossible to not be snagged up by these meaty pairings, just as Mr. Sharifi’s hypnotic “Tea” whisks the listener off on a journey of vast landscapes against the brightly colored “Red Ladies Tent Jam” by Tuareg Nomads Kiah Keya.

The musical landscape of Footsteps in Africa is haunting and magnificently rich as it explores the Tuareg’s connection to each other and the earth.