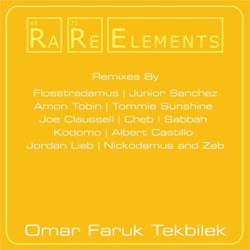 The Rare Elements remix series returns with a focus on one of the great masters of Middle Eastern music, Omar Faruk Tekbilek. Multi-instrumentalist Omar Faruk Tekbilek has made some of the most memorable and beautiful recordings of modern Turkish music in recent years.

His style is characterized by mesmerizing Sufi-inspired vocals and richly melodic instrumental work using instruments such as [wiki:ney], [wiki:baglama] and [wiki:ud] (oud), as well as fiery dumbek percussion. Now Tekbilek’s music gets reconstructed by some of the masters of the current international remix scene. The participants include: Junior Sanchez, Tommie Sunshine, Flosstradamus, Amon Tobin, Albert Castillo, Nickodemus and Zeb, Kodomo, Joe Claussell, Cheb i Sabbah, and Jordan Lieb.

Each remixer brings a unique vision of Tekbilek’s music. Some, such as Tommie Sunshine, Albert Castillo, Junior Sanchez and Flosstradamus go in a dancefloor direction, adding techno beats and loops for the club scene, while others, such as Amon Tobin and Nickodemus go in a more mystical direction.

Joe Claussell’s mix is the most appealing, with his mesmerizing mix of acoustic instruments and dreamy vocals with ambient elements, percussion, richly creative pitch bending synthesizers and electronic atmospheres. “This is an opportunity to offer the younger generation phrases, words, rather than whole thing all at once. This is still good. It’s a connection with music lovers,” Tekbilek exclaims. “I am after taste, soul, and feeling. One note, but with feeling.”

Rare Elements – Omar Faruk Tekbilek is a delectable spicy blend of Middle Eastern mysticism with the best of creative remixing.