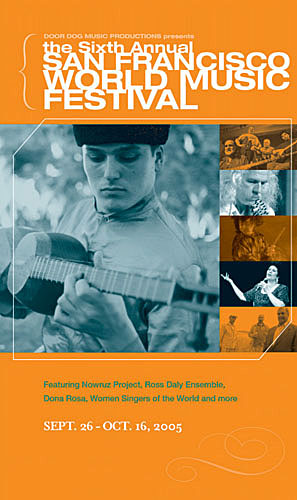 San Francisco, California, USA – The internationally acclaimed master percussionist from China, Wang Wei, will be presenting a concert on April 3rd at 7pm, along with didjeridu player, Stephen Kent, renowned tabla player, Jim Santi Owen, African percussionist, Ken Okulolo, and Beijing Opera jinghu player, Edward Young. This performance will be at the ODC Theater (3153-17th Street, San Francisco, CA 94110) and will feature traditional Chinese percussion pieces from various regional styles such as Beijing Opera, Hunan, Shaanxi, and Zhejiang, as well as, collaborative pieces with instruments from India, Africa, and aboriginal Australia. They will present their unique percussive traditions and combine forces to create a unique blend of Chinese, African, Indian, and other world influences.

Mr. Wang is a graduate of the Shanghai Conservatory of Music, then later joined the Shanghai Song and Dance Ensemble as their percussion soloist. In 1994, Wei and musicians from Germany, Inner Mongolia, Nanjing, Chengdu, and Hangzhou together formed an East-West ensemble called Crossing. Together, they won first place in the 1994 Beijing Jazz Competition.

Mr. Wang attended the Berlin Conservatory of Music, becoming the school’s first student ever to pursue a double major program in both jazz drums and hand drums/world percussion. After his graduation in 2000, he was invited by the Berlin Philharmonic Orchestra to perform as a guest bangu soloist with Maestro Kent Nagano in the “Rhythm and Dance” Concert. He has recorded extensively and has been featured in “Sister Drum” and the music for movie “Crouching Tiger Hidden Dragon“. In January 2004 and February 2005, he performed with the San Francisco Symphony in a Chinese New Year Celebration Concert.

Mr. Wang continues to perform all around the nation as well as to actively promote Chinese percussion through workshops and lectures. In 2004, he established the North America Chinese Percussion Society to promote the understanding and performance of Chinese percussion music.

Jim Santi Owen, co-director of the Indian percussion ensemble Tabla Rasa, is known throughout the musical community as an  accomplished tabla player and South Indian multi-instrumentalist. He has performed with many gurus across genres, participating in the circles of jazz, song, dance, and education.

Ken Okulolo, Nigerian vocalist, bassist, percussionist, and producer, is a well respected musician and famous for reviving traditional African music as well as combing it with jazz, rock, soul, and others. Okulolo is current leader of three bands, West African Highlight Band, The Nigerian Brothers, and Kotoja.

Stephen Kent, one of the few world renowned didjeridu soloists, has been critically acclaimed for his performances and recording projects all over the world. He continues to perform actively as a soloist as well as in collaboration with other well-known vocal and instrumental artists such as Youssou Ndour, Baaba Maal, Uma Sumac, Zap Mama, Boukman Eksperyans, Fatala, and Herbie Han*censored*. Edward Young, Beijing Opera jinghu (fiddle) player, will perform a famous solo work with Master Wang Wei.